Doug Hern has dedicated more than 30 years of his life to ensure the British Nuclear Test Veterans gain the recognition and support they deserve. He with claims, pensions and media coverage, as well as ensuring the next generation never forgets their sacrifice – conducting research, giving talks in schools and maintaining an official archive. 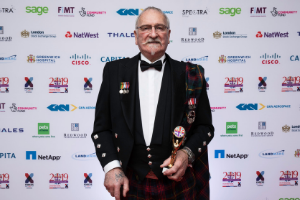 Doug Hern said: “I am overwhelmed by winning this Lifetime Achievement Award. I had intended to leave my general service after being on HMS Tireless for a short time and joining the submariners service. Before that could occur I was sent to Christmas Island for the Nuclear Bomb Testing Programme. I was on Christmas Island from September 1957 to September 1958.

“I was a founder member of the British Nuclear Veterans Association and still serve as their Historian and will continue to do so as long as I am able. I do not see my work with the BNTVA as being special, there are thousands of other volunteers around the world who dedicate their lives for worthwhile causes. I would like to dedicate this award to all Nuclear Veterans around the world who have made it this far and in memory of those who haven’t”.

Alan Owen, Chairman of the BNTVA said: “The British Nuclear Test Veterans Association are delighted that Douglas Hern has been awarded the Lifetime Achievement Award by the Soldiering On Awards. His dedication to the BNTVA in an unpaid role, travelling the world to raise awareness of the Nuclear Veterans is one that deserved recognition. As a small charity relying solely on volunteers, this Award will highlight that many small charities provide invaluable services to their beneficiaries, often changing people’s lives.

“Douglas and the Nuclear Veterans continue to campaign for a medal for their unique service, which is long overdue. This award is dedicated to all Nuclear Veterans around the world who have made it this far and in memory of those who haven’t”.