Jamie’s Dad struggled to make the transition to civilian life when he left the Army after 21 years service, and he sadly took his own life. The then ten-year-old and his mum, Mandy, were helped by military charity SSAFA, and decided they wanted to turn their grief in an amazing fundraising effort for the charity. Jamie is our youngest ever Finalist, and his strength and courage is an inspiration to all those he meets. 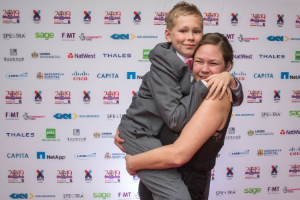 Jamie was also presented with a signed shirt from his beloved Liverpool Football Club, who his Dad also supported.

Jamie’s mum Mandy Small said: “There are no words to describe how proud I am of Jamie right now and how much I love him. To be able to channel his grief at such a young age into helping others was inspirational and to receive such recognition from the people he wants to help is something that he’ll

Lieutenant General Sir Andrew Gregory, KBE CB, Chief Executive, SSAFA, the Armed Forces Charity said: “Jamie Small, quite simply, is an inspiration.  Out of the devastating loss of his father, the fact that he chose, at ten years of age, to raise thousands of pounds to help others is humbling.  It has been SSAFA’s privilege to assist, in a small way, him and his mother at their time of need and now to witness his energy and determination. I and all in SSAFA are delighted that Jamie’s extraordinary efforts have been nationally recognised and offer him many, many congratulations.”

Nick Thurlow, NetApp Managing Director said: “For the military, deployments to war zones can be only half the battle – coming home and processing their experiences can be a war not so easily defined. It is something that reaches beyond the individuals, rippling through their families and those providing a support network. We are proud to sponsor the Soldiering On ‘Family Values’ Award and share in the celebration of those innovative individuals, families, and groups proactively committing to nurturing these core human values. Through their visionary and compassionate missions, they aim to restore and rehabilitate those values. They are the unsung heroes and we hope that our sponsorship will elevate the importance of compassion and human connection.”