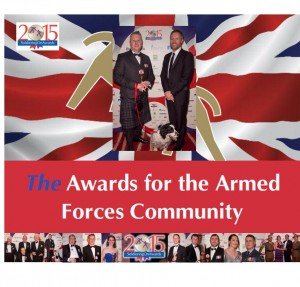 Nominated by the RAF Benevolent Fund, Memphis was on patrol in Afghanistan in 2011 searching for improvised explosive devices (IEDs) when he momentarily left the side of RAF Police dog handler Corporal Mick McConnell. At that moment, McConnell stepped on an IED. Even though it only partially exploded, it caused irreversible damage.

Despite almost two years of rehabilitation, McConnell is still on medication and, last year, took the decision to have his foot amputated. Once Memphis, a Columber cocker cross, retired from duty, McConnell decided to adopt him. Memphis has been instrumental in helping him cope with losing part of his leg.
“Having Memphis in Afghanistan gave me the confidence to operate in hostile conditions and combat situations. Most importantly Memphis saved lives and allowed the troops we were attached to to move safely and quickly, thus commanding the ground and helping the local populace to live their lives in safety and with freedom. 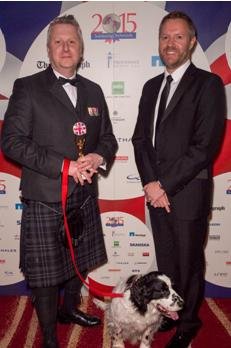 “Memphis is the reason that I get out of bed in the morning, he is a reason I get out of the house and do not hide myself away – which would be so easy to do. He brings me out of my dark places and reminds me that I need to live and not let life grind me down.
“He gave me confidence to put one foot in front of the other in Afghanistan and now gives me comfort and confidence to get out and about. He also makes me smile every day!”
Memphis was recognised at the 2015 Soldiering On Awards held Saturday 18th April at the Park Plaza Westminster in London.