Nominated by True Heroes Racing and put forward by the Veterans of War charity, Murray suffered extensive injuries when the vehicle he was commanding triggered an improvised explosive device while on tour in Afghanistan in December 2010. He suffered a broken pelvis, ripped liver and spleen, six fractured vertebrae and severely broken bones in both feet. Upon returning to the UK 48 hours after the explosion, Murray was a double amputee facing an uncertain and dark future.

Determined to enjoy all the things he’d done before, Murray looked to motorcycling, a hobby he had been passionate about since the age of seven. By April 2011, against the advice of his surgeon, he was back out on the roads on a newly-modified road motorcycle.
Shortly after, Murray met Royal Navy Warrant Officer Phil Spencer who, while admiring his story and passion, felt uncomfortable with Murray learning how to ride again out on the open road. Phil suggested going to the safer environment of a closed race track, from where, very rapidly, Phil developed the concept of an injured Servicemen’s race team. 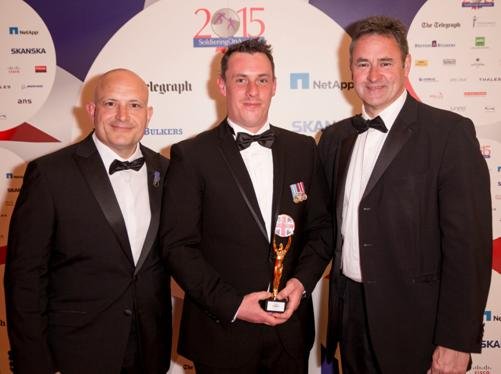 In early 2012, Phil formed True Heroes Racing, the UK’s first injured Servicemen’s motorcycle race team. It was an opportunity to offer injured UK Service personnel a chance to restore their focus and sense of direction through competitive motorcycle racing. In April 2013, Murray, the team’s first rider, became the first and only double amputee to race at the British Superbike Championships.

On the night Murray was also congratulated by his hero, the most successful World Superbike racer of all time, Carl ‘Foggy’ Fogarty MBE.

Founder and team manager Phil Spencer, wrote this about Murray in his nomination:
“He has approached every obstacle with the same humour. After all, this is a man who has “LEGLESS” emblazoned on his race helmet and leathers! He’s shown that anything is possible and that the only limits in life are the ones you impose yourself.”

Murray Hambro was recognised at the 2015 Soldiering On Awards held on Saturday,18th April at the Park Plaza Westminster in London.